Project meetings are mainly focused on administrative and content related issues – this is the same with the SKIVRE project. However, our SKIVRE team decided that we would like to get more out of a meeting and agreed that we try to complement the meetings with study visits to places and examples relevant for monastic product development.

Our SKIVRE meeting in Athens in March 2020 was excellently complemented and accompanied by our Greek colleagues from GUnet: They organized for the SKIVRE team an exchange of experiences with representatives of the Orthodox Church leadership, two study visits to Orthodox nunneries and an exchange of experiences with volunteers in an extraordinary monastery shop.  Our Greek national advisor, Professor Sotiris Despotis (Head of Department of Social Theology and the Study of Religion at the National and Kapodistrian University of Athens) supported the Greek colleagues with his contacts and expertise.

Visit to the Archbishop of Athens

Our positive experiences with orthodox monasteries in Bulgaria were repeated in Greece: We met with constructive interest and great openness in communicating our SKIVRE training contents for the development, production and distribution of monastic products. In conversation with Archimandrite Father Spyridon Katramado, General Secretary of Synodical Office of Pilgrimage Tours and Development of Religious Tourism, he left no doubt that the Orthodox Church knows and appreciates the value of its monastic products and that it sees the economic potential very well. According to the Archimandrite, it is about professional product design for the international market and the opening of distribution channels. He asked the SKIVRE team for concrete suggestions how this could be implemented in cooperation with the Greek Church. The seriousness of the request was underlined by a reception of the SKIVRE team by the head of the Greek Orthodox Church, his Beatitude Hieronymos II, Archbishop of Athens and All Greece and Primate of the Autocephalous Orthodox Church of Greece. The Archbishop as well as the Archimandrite gladly made themselves available for joint pictures – an extraordinary experience for an ERASMUS+ project. 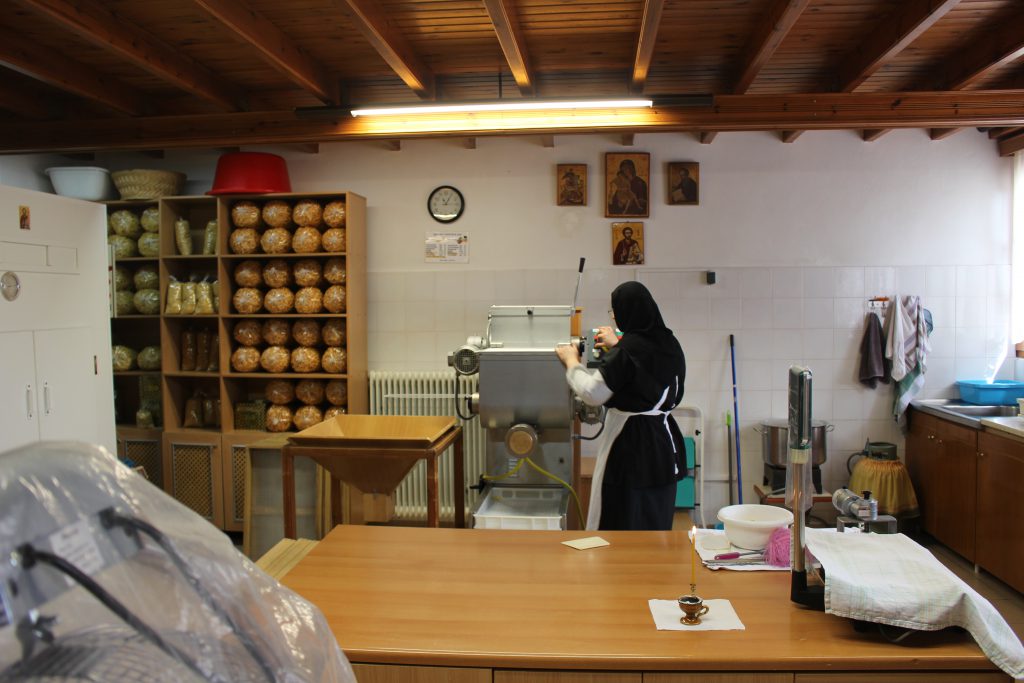 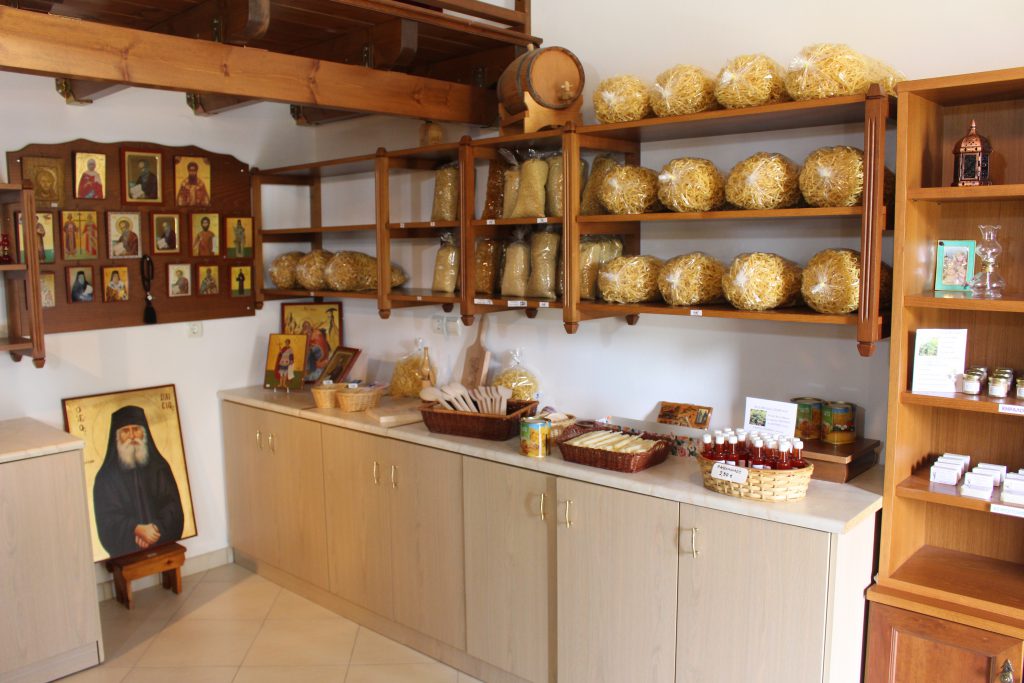 For the first time in the history of the project we visited two nunneries and were immensely impressed: The Monastery of Saint John the Theologist turned out to be an extremely well-maintained facility which was built entirely by the nuns, who also carry out all maintenance work on the facility. Sister Sigilite guided our group through the facility and explained the historical church, the grave of the founder, the carpentry and the pasta production. In the following conversation she went into detail about production conditions. In the monastery shop noodles, ointments, healing oils, spiritual literature, devotional objects and spiritual objects of the Orthodox Church are offered. They are presented in an appealing way and are obviously accepted by visitors and residents alike. The nuns act in a highly professional manner, and the view into the noodle production was at the same time a glimpse into the monastic life, because prayers accompany the production process and are seen as an integral part.

The second nunnery, the Holy Monastery of the Ascension of the Holy Cross, is a comparatively recent foundation and was built on a hill close to Athens in the Eighties of the last century. An orthodox community of sisters of the Ascension of the Holy Cross built the monastery. Today, nuns and monks are living and working there. Sister Archontia guided through the complex and explained the challenges in developing products:  Several monastic products are already produced in the monastery, but there is a lack of continuity because the sisters are sent all over the world to support or found other monasteries. Valuable knowledge such as bookbinding (as a recent example) is thus lost for the Greek monastery. At the moment, two monks, who were trained in a special school in Northern Italy, are producing high-quality mosaic pictures in the monastery – and were invited spontaneously by Matthias Wagner of our partner Kloster Bronnbach to offer a mosaic workshop in Bronnbach next year. 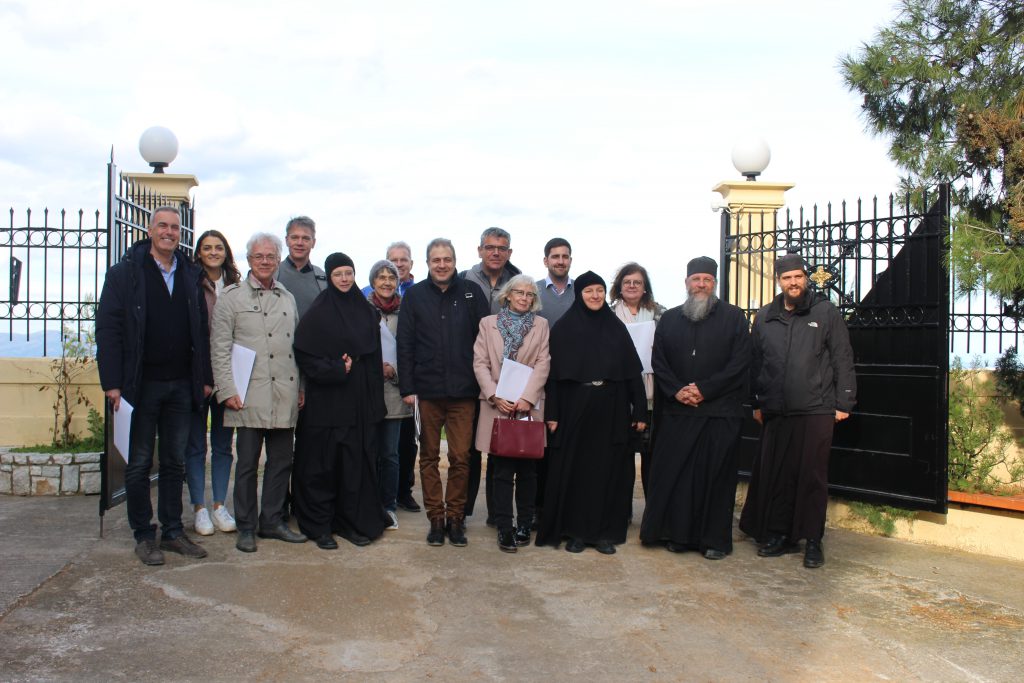 Remarkable in both nunneries were the immensely well-kept buildings, gardens and paths, and we remembered the statement of an Igumen (abbot) in one of the visited Bulgarian monasteries in May 2019, who said “We are a counter-design to the rest of life, and this should also be reflected in the structural layout of the monastery”. 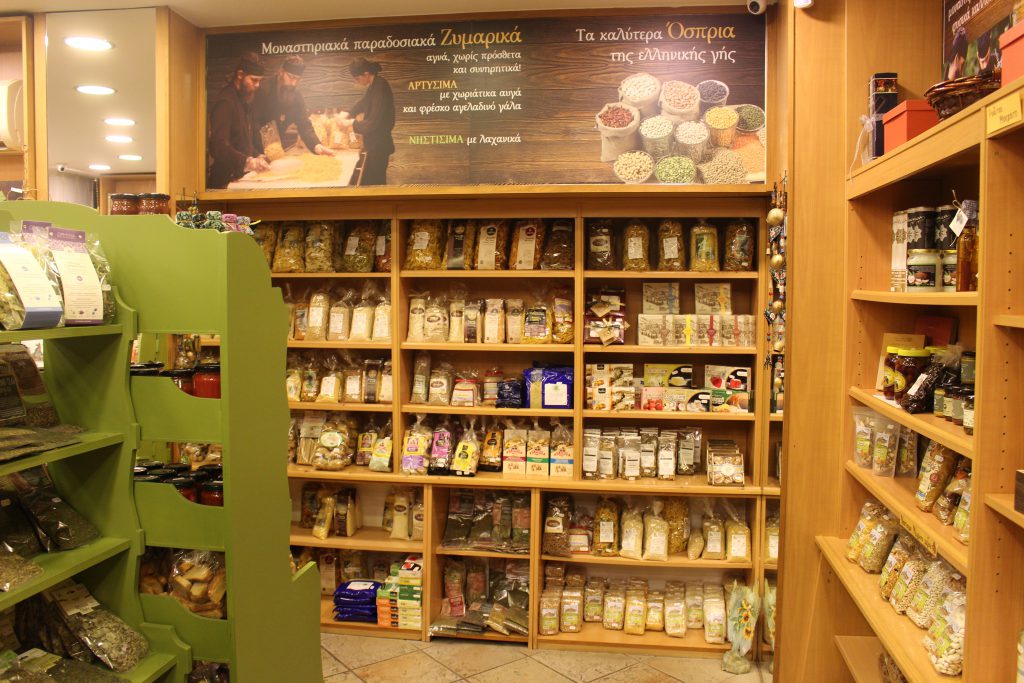 In the SKIVRE training materials we looked in detail at what a successful monastery shop should look like – in Athens we were able to visit an exemplary monastery shop. The Monastery Shop of Monastiriakokelari exists since 2017 in the centre of Athens in a busy shopping area (located at Ippokratous 15) and offers own products as well as products of other monasteries. The sales area is rented from the University of Athens and is run by volunteers: six persons are working in the shop. Many passers-by get in because they are curious about the products. Meanwhile around 200 customers get into the shop per day.

– Many young customers, mostly students, come because of the organic products

– Elderly customers are looking for alternative and traditional remedies.

Overall, this monastery shop is a very good practice and we wish the operator many more satisfied customers.